Citizen Science: strengthen the bridge between the academic community and the society 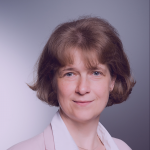